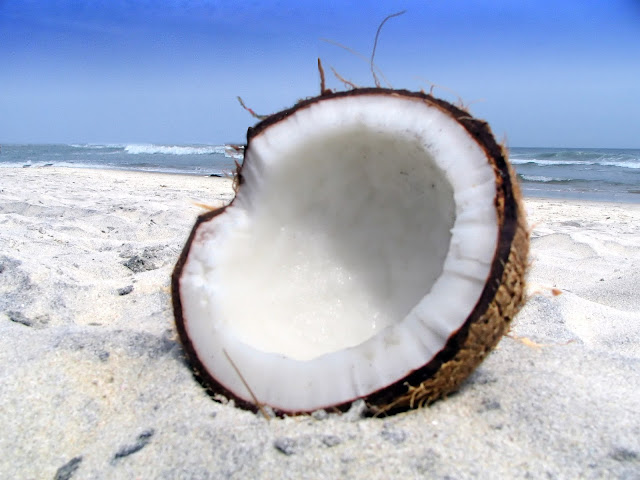 Some facts about Coconut:

Coconut or scientifically known as Cocos Nucifera, is the only living species of genus Cocos and is the part of Palm tree family. The word Coconut is derived from Portuguese word ‘Coco’ which means “head” or “skull”. Unlike other fruits, coconut is a unique kind of palm fruit due to its appearance and components. Coconut is comprised of a hardy skull like structure at the top which protects its internal edible parts. Under the hardy substance, it contains a white edible substance which is commonly known as ‘flesh’. Despite of having an edible substance, it also has a white clear liquid, commonly known as ‘coconut water’, which probably makes it different from other fruits. Its water sometimes is used as beverage also which is very healthier for our skin and body as it contains some important vitamins and minerals which are required by our body in a fixed proportion for the proper functioning of our body and various internal organs.

The origin of coconut is generally considered from Southeast Asia. The common known parts are- Indonesia, Malaysia, Philippines and also between Indian and Pacific Ocean. Coconut is very healthy and has a wide range of usage in our day to day life. But it cannot be grown anywhere. Coconut requires a some essential conditions to grow well. Coconut Palm tree grows well in an equatorial climate. It requires well-drained soil. It generally takes about 3-6 months for coconut seed to germinate. 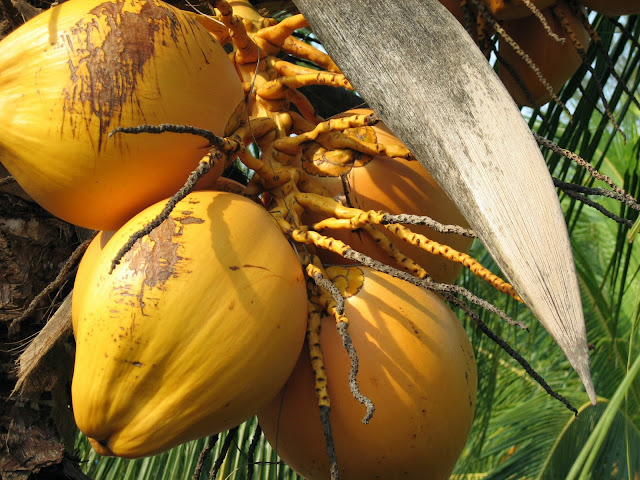 Some benefits of Coconuts:

Coconut water in itself is the source of various benefits for our body and skin.

· It prevents us from getting dehydrated during summers.

· It keeps our skin healthy and glowing.

· It is rich in Potassium which is required for proper functioning of our organs and helps in regulating fluid balance, muscle contractions and nerve signals.

· It has low calories which prevents us from unwanted fat. It is free of fat and cholesterol.

· It also prevents us from kidney stone due to the presence of some sorts of potassium in it.

· It contains Vitamin B which helps in reducing stress levels.

Despite of coconut water, eating only coconut also has various positive impacts on our body.

· Coconut helps in weight lose and helps in digestion. In a scientific study, it is found that eating about 100 grams or 1.3 cups of fresh coconut helps in reducing weight as compared with same amount of peanuts or peanut oil. It also contains essential components like Iron and Manganese.

· Eating raw coconut at night before helps in keeping our heart healthy and also the fiber present in it helps a lot in burning extra body fat.

· Presence of some sorts of fats also helps in regulating the good cholesterol level in our body.

· Coconut oil manufactured from dry coconut, if applied on skin, creates a protective layer on our skin which traps the moisture inside and helps in keeping our skin moisturized, hydrated, glowing and shiny.

· Coconut oil not only keeps our skin hydrated but also applying it regularly under eyes helps in reducing dark circles as well as reduce puffiness due to the presence of anti-inflammatory sorts.

Despite of being healthy for skin and our body, coconut is also used in making various sweets and dishes. One of the most common and famous dish made from coconut is “Coconut Burfi” which is famous in the parts of India.

Coconut Burfi is the famous south Indian sweet dish made with Coconut, sugar, milk, cardamom powder and various other ingredients according to the need and availability. It takes about 40 minutes to make this delicious burfi.

Heating a pan, adding ghee and dry fruits, frying it until golden fry then adding coconut and milk, stirring it well until combined and give a boil to the mixture, on low flame, let the mixture cook until milk gets evaporated and then add sugar according to the taste, add ghee according to the need and let it be cooked on low flame, when the mixture gets free from moisture completely, put it on a greased pan, let it be dry and dense. Cut the pieces and have a bite, it really tastes delicious and also is completely healthy for our body, has no side effects until and unless one is not prone to higher fats.

Coconut has various other uses-

– Coconut is also used for making Cookies, to give it a delicious flavor.

– It is used in porridge at last for garnishing which gives it a final taste and look.

– Dry coconut is also added in some edible oil which are healthier for our body.

-Dry coconut is also used for manufacturing non-edible oil which are healthy for our skin.

-Coconut is being used in chocolates to give it a final flavor.

Side-Effects and Precautions one should take while eating Coconut: 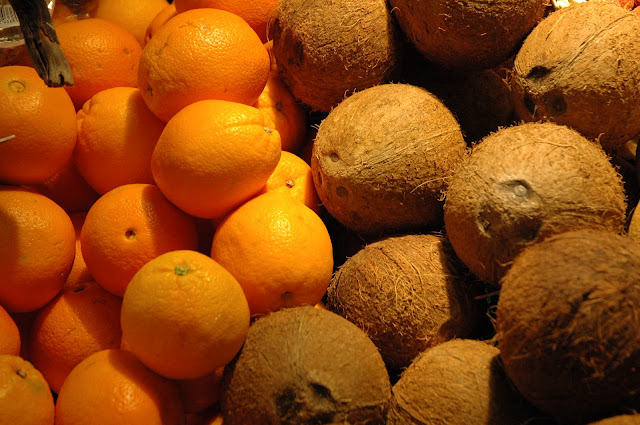 Though coconut is healthy and tasty, but as it is said, ‘excess of anything is bad’. Coconut also have drawbacks in some situations. People should be cautious enough to know and understand some facts about coconut.

-Eating to much coconut without caring about the body type can cause increase in blood pressure and cholesterol level in our body.

-Coconut has high calories, which, if having more than enough, can be hazardous for our body.

-Higher doses of coconut water can increase blood potassium level, which can cause irregular heartbeat and kidney problems.

– Coconut oil sometimes, if used in excess, can cause Nausea.